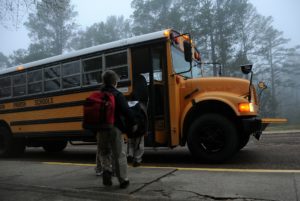 Why “Back to School” Can Be Hard For Women Who Have Placed a Child for Adoption.

Excitement was in the air as the new students boarded the school bus ready to begin another year. Watchful parents stood at the bus stop exchanging conversation with other equally concerned parents. Some had younger kids in tow. Anna stood quietly observing the chatter. She wondered if she too would feel a part of their camaraderie had she not just recently placed a child for adoption. A child who was painfully just about the same size as the baby wriggling to get free from her grasp so he could run with the other kids too young yet for school.

She was struggling lately and she definitely wasn’t prepared for all the triggers that this morning was sending her way. It had been 15 months since that day. Moving on with her life since the adoption had been a daily struggle. She had some good days but other days she experienced doubt and emptiness.

Anna smiled as her daughter got on the school bus, not wanting to dampen the excitement for her first day. Her daughter, Emily, had just turned 8 this past summer. Anna was thankful that Emily had managed to remain somewhat unaffected by her recent relationship turmoil but knew they both had a struggle ahead. Finding out she was pregnant 15 months ago was one of the hardest days of Anna’s life. After researching all of her available options Anna, chose an adoption plan for her child. She still has a hard time talking about it. Only a few people in her family and at her job even know what she just went through.

That morning as every other morning, Anna looked at the picture of her son on the nightstand beside her bed and smiled. Looking at her son’s smile always made her smile. She was really thankful that the parents she chose to raise him always remembered to include her in his childhood years. They had agreed upon an open adoption which included photos and updates every few months.

Anna walked back to her apartment and wondered if Lindsey, the girl she had met at a local support group for birth mothers, had ever felt the way she was feeling today. She decided to give her a call. Lindsey picked up the phone and immediately let out a huge sigh, expressing relief that it was Anna calling. Lindsey was a veteran birth mom. When Anna showed up for her first meeting it was Lindsey who came right to her side and made her feel instantly comfortable.

Lindsey had placed twin girls for adoption 8 years ago when circumstances in her life became uncontrollably chaotic. Lindsey always felt the back to school blues. Her heart ached with wonder picturing her kids in shiny new sneakers. She wondered if they were excited or if they would be shy and nervous like she had been growing up.  Driving through town, she often wondered if she would see her children standing at the bus stop. She wasn’t sure where they were living right now. The agency that she worked with told her that the twins would always be kept together and that she would receive photos and updates regularly so she could watch them grow.

That lasted for 5 months. She treasured those 5 months and the few glimpses she was given. Even though they would be 8 years old she only remembered them as two tiny infants. She was never given the healing benefits of seeing them grow up that she so desperately needed. The family she chose for her child had no prior adoption understanding or education in adoption relationships. Fear and the business of life prevented them sending the photos and updates they had promised her when she was still pregnant and a welcomed part of their life.

Anna and Lindsey talked together and shared their recent struggles with each other, ending the call making sure they would see each other at the next birth mom support group and with a promise to get together soon.  Their relationship with one another was a life line for both women as there were so few people in their lives who could really understand what they had been through and how that experience effects them today.