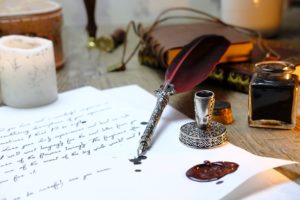 To my Son’s Adoptive Mom on Birth Mothers Day,

Our relationship began on paper, 30 years ago.  Now, I find myself reaching out to you with the same means of communication.

An anonymous letter between us.

Many years ago, I wrote a letter to you,thanking you for taking care of my son and requesting my son’s chosen birth name be saved.

I wrote another letter to my son. In his letter, I tried ever so hard to make him know that placing him for adoption wasn’t because I didn’t love him enough or want to raise him but rather that it was impossible for me to provide him with the stable life he needed.

Your letter told me about the kind of lifestyle that you were hoping to provide for my child, assuring me that you would offer his birth name at confirmation. You gave me your word that you would give our son his letter in exchange for the blessing of a child that would change every aspect of your life.

I kept a handwritten copy, believing with all my soul that you would do as you said.

I was young, just turned 16, yet I knew what I needed to do to provide the kind of lifestyle my son needed.

You embraced the LETTERS. THEN.

You went on in your life with the closed adoption privileges afforded to you back when adoptions were kept private and information about each other’s identity remained anonymous.

You were a wife and now a mother to a son AND a daughter who two years prior was also brought into your life through the selfless giving of another birth mother.

I went on in life and tried to make sense of what had happened and what I was going to do next.

I lived my life trusting the LETTER would find its way into my son’s heart come his 18th birthday. Maybe you’d wait until he was 21 but surely you would give him the LETTER because you told me so and I believed you.

But that was THEN.

18 years went by, then 21, and still no word from the son who I longed to hear from with the bluest of eyes. We parted having only the date of birth as a clue to reconnect us.

AND we had FATE.

He and I had spent 6 days together after his birth and I sincerely believe our hearts spoke to one another, saying our temporary goodbyes, making plans for the years to come.

We were destined to be together again because this world is far bigger than what we can see with the physical eye. Fate always works in the unseen realm.

23 years went by and the phone rang. The caller said the words my heart ached to hear….

“Did you dress a little boy with the bluest of eyes in a special outfit and place him for adoption on this date?”

I dropped the phone! Tears of joy! Shouts of celebration from myself and the children I later parented when in a better place in life. They all knew they had a brother who we would see again.

My forever changed. My son was back in my life again.

Was it the LETTER that led him?

The letter wasn’t given to him as promised. I was registered on an adoption registry and an adoption angel saw our matched birth dates.

BUT FATE stayed with him all through the years and led him home again. Fate is known to bypass all obstacles that stand in its way.

Fate does what Fate does…It allows what was destined to be -to BE.

NOW my heart is complete. A piece of my soul has been returned to me. ALL of my children are back in the fold.

Yet there is still a part of me that aches.

The leftover residual of our adoption experience.

It still remains in the hands of the one who promised to give it. 30 plus years later. Despite the reunion, the letter remains ungiven.

NOW the same two women have a silent division between them.

I shall be celebrating BOTH days with the utmost of gratitude and love for EACH of my children.

FIRST, I shall celebrate Birth Mothers Day. This day commemorates the fact that I chose Strength when Fear was before me. I chose better for my son than I was able to provide at the time he needed to be parented.

SECOND, I shall celebrate Mother’s Day to commemorate my love for ALL of my children who fate chose for me to be the vessel to bring into the world so they can each live out their own personal life journeys.

It is with THIS LETTER that I choose to no longer allow the pain that is associated with this event to hurt me anymore.

I remain grateful to you for being a great mother and loving our son, to fate for bringing my son and me together again AND I  wish you a very Happy Mothers Day, with the hope that others can learn from our experience and do things differently TODAY as a result. 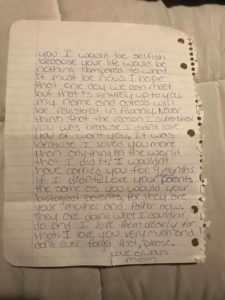 Signed with all the love that has ALWAYS been present on my part,
Kim