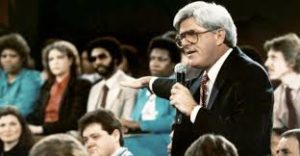 Humility, School, and Phil Donahue.
Eventually, Berner High School decided it was in everyone’s best interest if I disappeared for a while.
I was enrolled in a BOCES type school where they had classes for pregnant women and some even brought their baby with them to school so they could still get their high school diploma.
I hated it. I felt embarrassed, alone and hidden away. It seemed to be a theme for my life. Whenever something happened and someone tried to help me it felt like it always resulted in me being put away somewhere.
A year prior to my pregnancy, my parents told me we were going on a family picnic in upstate NY at one of my father’s friends houses. It turned out to be a halfway house for troubled youth. I was left there with some of my clothes and none of my friends knew what happened to me. My parents were hoping to get help for me as I was drinking alcohol heavily at that time.  I eventually ran away with another girl from Shirley, Long Island. We were soulmates for 48 hours as we bravely made our way back miles and miles and miles. Back across the Delaware River and to my front door in Massapequa, Long Island. My parents were exasperated. They didn’t know what to do. I was left feeling deceived and abandoned not helped in any way.
Here now, a year later, that feeling of abandonment was beginning to resurface as I was forced to attend this special school for pregnant teens.
Life had become complicated and lonely.
The party had ended once I had stopped being the “life of the party”. My friends weren’t coming around as much anymore. They were still out there enjoying the party. To make matters even more awkward, I had to travel on the “short yellow school bus” to school each day which further added to my humility. You see, I had an image to keep as a teenager and riding the short bus with a fat belly wasn’t doing it for me.
I would sneak out of the house as fast as I could each morning and run out to the bus. My only saving grace was that the short bus arrived for me an hour after the long bus had already taken the “cool kids” to the ” normal school.” At my new school, a couple of the girls had already had their babies and they would bring them to school each day. I liked that part and hated the rest.
Phil Donahue was a popular talk show at the time and myself and few of the other students were asked to be on his show and talk about teenage pregnancy.  Seems, pregnant teens were a commodity back then.
There was one girl  I recall who was also pregnant yet she was different from all the rest. She rode the short bus with me and was from Akron Ohio. I have no idea why I remember peoples towns more then their names but yet I do. She was confident, mature and planning on placing her child for adoption and she was the only person I ever knew who considered such a thing.
I didn’t like her at first. I thought she was really selfish and did not see how I could ever relate to her. I ignored her for the most part and spent most of my time with Sheila, Sheila was pretty, fun and had the cutest little bald-headed baby boy whom she would bring to school each day. Sheila looked like her whole life was together and she was raising her son and going to school and all was working out for her…..
Or so it seemed,
THAT was what I was planning. I would have it all together too and raise my child. I would get a good job and even an apartment if I had to. I could do this. My child could still live a good life with me as a single mom. I would do everything possible to make that happen.
Right?
to be continued.
Posted in Blog Posts and tagged adoption, phil donahue, teen pregnancy
← Pooh Bear, Paint and Promises – Chapter 2Accusations, Church and State – Chapter 4 →