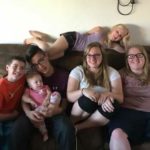 Posted in Birth Mom Stories and tagged adoption, birth moms, birth moms today
← Why “Back to School” Can Be Hard For Women Who Have Placed a Child for Adoption“THE EASY WAY” →