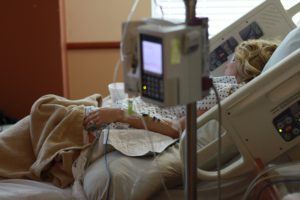 I was 9 months pregnant and ready to have my child in just a few more weeks. I cried every day upon waking and again my tears would put me to sleep at night. As my stomach grew bigger and bigger, so did the love for my child. I wanted more than anything else in this world to be able to offer a lifestyle that would conducive to his or her future and until the last moment, I hoped beyond hope that something different would happen in my life that would enable me to raise my child.
I thought about the family in the profile that I chose. I felt strongly that my child would benefit from having an older sister to share the adoption part of their story with. I imagined them playing together and growing up over the years, confiding in each other as exciting events took place in their lives. In my young mind, I also imagined them hugging and crying together when schoolmates were mean or misunderstanding of their adoption story. She would be my child’s “angel” looking out for her younger sibling until fate would bring us together again.
I tried to picture the parents. The profile said the mom was a teacher but would be staying at home once they had a child. I was so happy. The father studied in the priesthood but thankfully he decided he would make a better husband than a priest. I thought he might be patient and gentle as a result of his training and I wanted my child to have a home filled with love and kindness. The profile said he worked in advertising and that offered me the hope that my son would be raised in a financially stable environment. There was more about family involvement etc. I had read and imagined enough. I knew then that this was the couple I wanted to raise my child. They were represented by an agency called the Catholic Home Bureau.
A short time after that decision was made, I went into the hospital to have a baby and all of a sudden time went from months of slow expectation to super fast. I didn’t feel ready for my time with my child to end. I knew I would never feel ready for that moment.
I was checked in at Mercy Medical Center in Rockville Center, NY. My room was in a hospital wing with people who were having general surgery. It wasn’t the maternity wing.  I think they thought it would be easier for me this way. As if this could be “easier”. 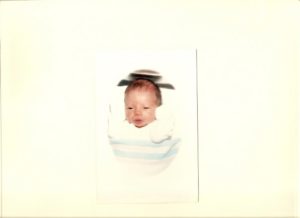 Sister Dee came from the home and stayed with me for the c-section. She was my pillar of strength. I was awake but I couldn’t feel anything. I saw a miracle happen that day as Michael Christopher was born on June 21, 1986. We looked at each other and smiled through the tears. She knew. She knew this moment of absolute bliss and joy was also a sad one and she stayed with me to the end.
My son was a little peanut so small and precious. He had the bluest of eyes and as I looked into them each day I wanted for him to live the best life possible. I knew it wasn’t meant to be with me. Not yet anyway. He needed time to grow in a loving and stable environment and I wasn’t able to stop the clock long enough to make that reality happen. It was heartbreaking. I had never been acquainted with this type of pain before.
I don’t remember much except that I was able to stay in the hospital for 5 days instead of the usual 3 due to the c-section. This allowed me extra time with my son. Every day I help him tight and fed him and cried.
My mom came to visit and we both held him and cried. 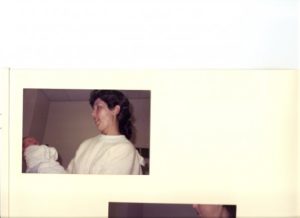 My brother and his wife came and my sister too. Her husband tried to cheer me up by cracking jokes but the laughter hurt just as bad as the tears due to the incision. My sister in law offered to raise my son..but with one stipulation. I would have to be anonymous as the mother. Though I was desperate for a different solution I passed on the offer.
I never knew pain to the depths of what I was feeling at this point in my life. It was unbearable and I wanted to die.
The day came that I was to leave the hospital and my son would be leaving before me. I went into my hospital room and got the special blue outfit that I wanted him to wear to his new home. Even as I recall this decades ago the tears flow freely. I dressed him and held him and loved on him with all my might. The nurses came in with excited cheers and said: ” Oh! you are able to keep your baby?”!! We’re so happy for you!!”, Through tears, I said: “NO! Stop!  I am dressing him for his new family.”
My social worker, Karen came and told me I was a real trooper. I felt more like a casualty of a war than a trooper. We put my son in a car seat and she turned to walk out of the room. Impressed forever in my mind is the closing of those two folding doors as I was stood alone and watched them leave.
I got in the car to head back to the unwed mothers home to gather my stuff. It was the day I could finally go back home to the white castle on Ocean Avenue. Back to where I had left off in life before going to the home. It was like nothing had changed AND everything had changed all in one feeling. My first stop was my bedroom. I sat on my bed and looked around. My Iron Maiden and Metallica albums still where I left them. My Fing Marlboro sign on my wall. My old clothes. Everything still bore the resemblance of a carefree teenager who had once lived there. Everything was still waiting for me to jump back in where I left off.
What on earth was I supposed to do next?
I spent most of my days in bed crying. I went to one support group meeting where the speaker said: “Time heals all wounds.” I glared at her. What did she know? Time only made the wounds hurt deeper.
I had no friends. No one had been willing to stop partying long enough to enter my pain. My parents and family thought by not talking about what happened it would make me hurt less.  The reality was that it hurt more and I grieved alone.
A week after I was home from the hospital I changed my mind. I went into a panic and called my social worker. I told her I couldn’t live without my son and I needed her to get him back. She told me I would have to prove I was at a better place in life now that was conducive to raising a child. I couldn’t do that. Nothing had changed. I felt so awful for disrupting my sons and the adoptive families life and eventually came to re-remembrance of why I was placing him for adoption in the first place. I guess I signed the papers. I have no record or copies of anything adoption-related. Adoptions were closed then and it was all so secretive and I could only hope that I could trust the people who were assigned to me.
I blocked most of it out of my memory as a survival technique.
-to be continued.
Posted in Blog Posts
← Food Shopping, Sweet 16 and C-Sections  – Chapter 8The Letter, Fate and a New Beginning – Final Chapter 10 →