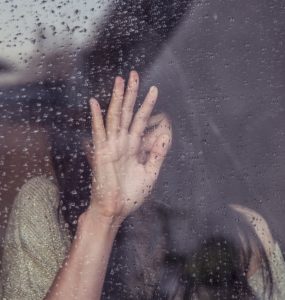 Behind the Scenes- The Breakdown, More Hideaways, and Loneliness
I hopped off the short bus ready to race inside my house before anyone could see me or my fat pregnant belly. I had gotten really good at the race inside the house after school each day. I had it down to mere seconds despite the growing girth of my waist.
This day was different. I was stopped short in my tracks. My dad was standing outside the house and it wasn’t night time. I knew something was majorly wrong. He worked 24/7 and we rarely saw him. Especially not on a weekday and in the afternoon.
We lived in a beautiful contemporary house that was more like a white square castle. As a kid, I was embarrassed by its uniqueness. Now as I looked up at it I couldn’t help but shudder. It was almost evident that impending doom was lurking behind the walls.
I asked my dad what was going on as he walked to his car and said something usual like: “I can’t handle this. I’m out of here.”
Instead of walking inside and finding my mom watching General Hospital, the downstairs was cold and empty. Upstairs, I could hear this awful noise coming from her bathroom. I stood there frozen and listened. It was non stop screaming. I ran upstairs to the top floor to find my mother having a nervous breakdown. I had no idea what to do. She was frail and sobbing. She was overwhelmed with the grief of knowing that since there was prior abuse in our family I could not raise a child in our home.
I knew she wanted me to go to a home for unwed mothers. The catholic church had told her about it when my boyfriend’s mother exposed us to the church. I had been completely against it. There was no way I was going to be hidden away and abandoned again. Nope. Not having it!
Today, it was the only tool in my arsenal and even more importantly, I knew it held the power to help my mother.  Yet, I was exceedingly reluctant to give myself over to the nuns and enlist myself in the “convent”.
As she shook and sobbed, I shook and sobbed. Eventually, I heard myself say the words: “Mom it’s going to be okay. I am going to go to that home for unwed mothers. They can help me. Please stop crying. It’s going to be okay.”
And so my fate was sealed.
Alone, 15 and no boyfriend on the scene, I went to the Regina Residence for Unwed Mothers in Merrick NY.
In total there were about 10 other pregnant unwed women residing there. I occupied a small narrow bedroom with a twin bed. White bedspread of course and a small desk.
Time froze as I stayed hidden away in my new “castle”.
-to be continued
Posted in Blog Posts
← Robberies, Jail  and Cancellations  – Chapter 6Food Shopping, Sweet 16 and C-Sections  – Chapter 8 →